How to Get Samsung’s Edge Lighting on any Android Phone

Samsung’s “Edge Lighting” really makes your smartphone look cool. While the original concept was to notify users about calls even when the phone was kept face down, not all the screens now have a curved screen. Heck, even the Galaxy S20 omitted the curved screen. Anyways, if you don’t have the Edge Lighting feature like Samsung and Realme users, let me pour some of my hard work. Here are a couple of apps to duplicate the same effect on any phone.

If you’re looking for an app that lets you enable stunning edge notification with customizations, Edge Lighting is the right option. Foremost, the app requires permission to draw over applications and secondly, you have to enable the lighting effect from the app itself before being able to tweak the light settings. 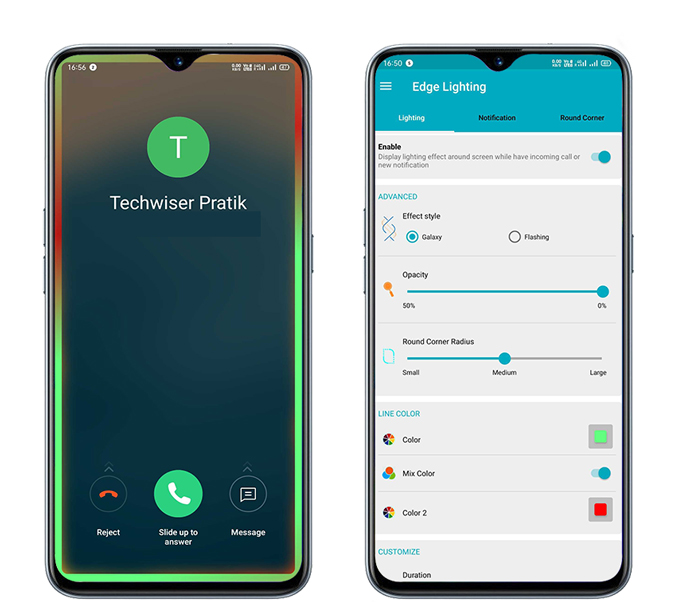 It has 2 edge lighting settings. The first one is Galaxy like, which means the edge lighting will be constant for a few seconds after a notification is received. The second one is the flash style option which makes your screen look peppier. You also have plenty of ways to tweak the light. For instance, you can choose the opacity as well as tweak the roundness of the corners. Similar to Samsung’s customization option, you can set the light duration, speed and also the thickness of the boundary. The app doesn’t constraint you and lets you choose either a solid color or displays a mix of colors for added vibrancy.

The app has ads but they are not intrusive. If you still prefer an ad-free version you can upgrade to a premium version at $ 1.70.

You might either like Edge Lighting Color or totally discard it. It’s a cool app and it has a slightly different concept to start with. Unlike other apps, it lets you use the Edge Light overlay all the time. So it basically turns your phone into an edge lighting live wallpaper. 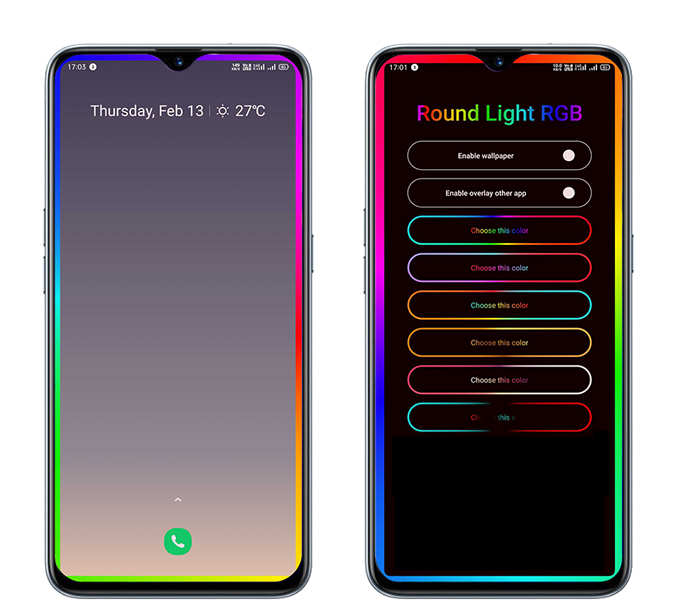 To start with, I didn’t like the app UI. It’s dark and fonts have a black overlay making them somewhat unreadable. Besides that, there are pre-made color combinations to choose for the edge and also preview it. In terms of customization, you’ve “Border Configuration Settings” where you can set the color, animation speed, border size and curves of the edge. The app also gives you the option to enable the effect with a notch, a punch hole or an infinity display. So, for instance, if you choose a punch hole it’ll project the edge lighting around the punch hole as well. Moreover, you can choose other graphics like dots, hearts, snowflakes, etc. The more you have the better it is!

There are tons of apps that do the same thing so I restrained adding all of them. Out of the two apps, if you want the same capabilities as Samsung and Realme devices, the first app Edge Lighting easily does that along with plenty of customizable options. But if nostalgia is the reason you’re reading the article, you might want to have an always-on edge light, be it on your home screen or lock screen. Choose the second app Edge Lighting Colors and show off the screen to your friends. If there is any other app that does things differently from the apps that I’ve mentioned above, do leave a suggestion in the comments.

Vaibhav is a broadcast journalist who can live without tech for sure. That's exactly what doesn't make him a fan-boy of anything specific and his coverage non-biased. He writes about things he believes are actually helpful in some way to the user.

How to Disable Annoying “Headphone Jack Plugged in”...