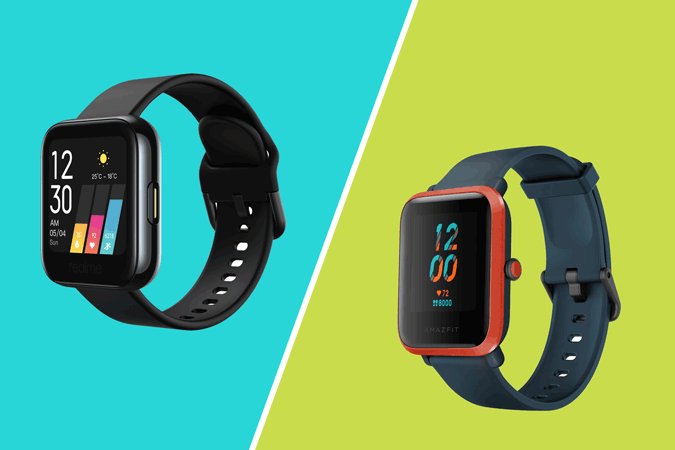 Realme, recently, launched its first smartwatch, the Realme Watch with a $60 price tag. Around the same price range, you also get the Amazfit Bip S. So, the obvious question is “What’s the difference between Amazfit Bip S and Realme Watch?“. Well, here’s a rundown of it.

The watches track your fitness activities and sync them to your smartphone via a smartphone companion app. The Amazfit Bip S uses the Zepp app (formerly Amazfit) whereas Realme Watch uses the Realme Link app (not on iOS). Additionally, these watches are capable of alerting and monitoring heart rate 24/7 along with sleep tracking.

Amazfit Bip S has a 28nm Sony GPS chip. Hence, you can leave your phone behind and go out for a run or cycle freely. The Bip S can track the entire route and you can come back and view the route on the map within the smartphone app. Moreover, GPS helps to more accurate distance and pace.

Realme Watch doesn’t have an inbuilt GPS but it has connected GPS. So, it can use your phone’s GPS to track your run. However, if you are someone who doesn’t like to carry his phone for an outdoor workout, it’s going to be disappointing. The Realme watch, as of now, cannot track the distance without the phone’s GPS.

The Realme Watch comes with a sharper and vibrant LCD display. It has a 1.4″ display with a 320×320 pixel resolution. Whereas, the Amazfit Bip S has a slightly smaller 1.28″ transflective display. In case you don’t know, transflective displays are a better version of e-ink displays and can show colors. The resolution on the Bip S is 176×176 pixels and the difference between the watches is clearly evident. The Realme Watch is better under direct sunlight as well as outdoors.

Having said that, the display on Bip S is a wise decision. It’s a low powered display and enables Bip S to keep it always on. On the other hand, the Realme Watch doesn’t have an always-on display even during the workout. Moreover, transflective displays get bright when you throw more light at them. Hence, the Bip S gets brighter even under scorching sunlight.

Both the watches come with their proprietary pogo pin charger. The Realme Watch takes around 2 hours to charge whereas the Amazfit Bip S takes around 2.5 hours.

Both the watches have a rectangular dial. If you look at the displays, both of them have a chunkier bezel. However, the Realme watch has a rounder display which makes it look more appealing. Additionally, the frame of the Realme watch is made up of aluminum. On the other hand, Amazfit Bip S has recycled the same old Amazfit Bip design and is all polycarbonate.

Overall, the Realme Watch looks a lot better and premium compared to the Bip S.

The Bip S can track both pool and open water swimming. It can detect your stroke rate, stroke time, SWOLF index, etc. So, if you are purchasing a fitness tracker particularly for swimming, Bip S is the only option.

6. Realme Watch has a SpO2 sensor

The Realme Watch has additional blood oxygen or SpO2 sensor. This helps in detecting the amount of oxygen in your bloodstream. However, blood oxygen detection is not continuous and you would have to do it manually every time. It would have been better if the watch could have detected blood oxygen during your sleep or workout.

7. Bip S can sync to Strava

If you are a running or cycling enthusiast, you might have used the Strava app. In days of this pandemic, Strava is the only place where you can participate in virtual races. So, if you are an avid Strava user, you would be amazed to know that the Amazfit Bip S mobile app Zepp supports exporting data to Strava. This way, if you are completing a challenge or running a race on Strava, you wouldn’t have to start the workout at 2 different places. The Bip S after the workout will automatically sync the workout to both Zepp and Strava.

Moreover, the Amazfit mobile companion app – Zepp is much better compared to the Realme Link app. It also allows competing with other Amazfit owners within the app.

While, both the watches can mirror call and app notifications on the watch, Bip S does a better job overall. For instance, the Bip S is quick to remove notifications from the watch if I’ve read them or swiped them away on the phone. With Realme Watch, it just keeps on compiling those notifications until I manually clear them from the watch. Having said that, Realme has been consistent in pushing updates and this might get better with time.

Both watches can display only 10 notifications on the watch and neither of them can display emojis.

Amazfit Bip S is a clear winner because it has better battery life, fitness tracking, swim detection, and smartphone app.  It is a more polished and well-thought-out fitness tracker in comparison to the Realme Watch. The Realme Watch is more of an unpolished first-generation version which might get better with after a few releases.