7 Best Ways to Draw on a Photo on iPhone 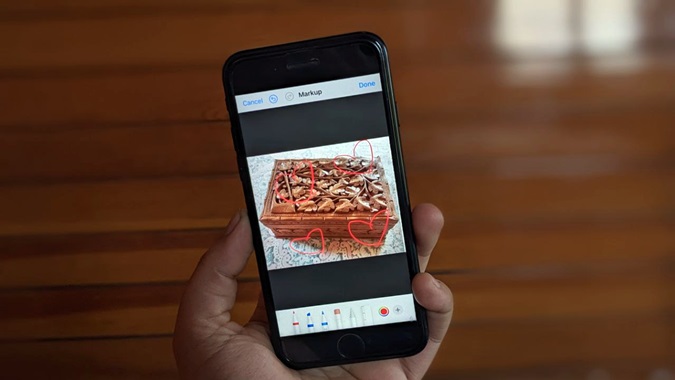 Just like you can draw on images on Samsung Galaxy phones, you can do the same on iPhone as well. Whether you want to mark something, point to an object, or simply draw or doodle on a photo, annotations can be quite helpful. In this post, you will get to know about 7 methods to draw on a photo on iPhone. Let’s get started.

Follow these steps to draw on a photo on iPhone that is present in the Apple Photos app:

1. Launch the Photos app on your iPhone.

2. Open the photo on which you want to draw or write something.

3. Tap on the Edit button at the top.

4. The editing screen will open. Tap on the Pencil icon at the top to open the Markup editor.

5. You will find different kinds of pens at the bottom. Tap on the one that you want to use and start drawing on the picture. Also, check the tips mentioned below to use the Markup tool.

Note: The original image will be replaced by the edited image.

Tips to Use the Markup Tool on iPhone

Use these tips to draw on photos using the Markup tool on iPhone:

Tip: Learn how to use the photo cutout feature on iPhone to make stickers.

To draw on a picture present in the Files app, follow these steps:

1. Open the Files app on your iPhone.

2. Long press on the thumbnail of the image on which you want to draw. Do not open the image.

4. Then, use the pens at the bottom and the tips mentioned above to draw on the image.

2. Tap on the Photos icon in the apps bar at the bottom.

3. Select the photo on which you want to draw.

5. Tap on Markup to enter the markup editing screen.

6. Use different pen styles to draw on the image. Tap on Save followed by the Done button.

7. Finally, tap the Send button to send the image.

Tip: Learn what happens when you mute someone on the Messages app.

You can draw on screenshots on your iPhone in two ways. In the first method, open the screenshot in the Photos or Messages app and then use the steps mentioned above to draw on the image.

Alternatively, once you take a screenshot on your iPhone, you can start drawing directly on the screenshot without opening any app as shown below.

1. Take a screenshot on your iPhone.

2. The screenshot preview or thumbnail will show up at the bottom. Tap on it.

3. The screenshot editing screen will open. Tap on the Pen (Markup) icon.

4. Then, tap on a pen and start writing on the picture.

5. Tap on Done and choose Save to photos to download the image with your drawing to the Photos app. Alternatively, you can even save the screenshot to the Files or in the Notes app.

Tip: Learn how to take a screenshot on iPhone without the home or power button.

To draw on a picture present in a note in the Apple Notes app on your iPhone, follow these steps:

1. Launch the Apple Notes app and open the note having the picture. Or, you can create a new note and add a photo to it.

2. Tap on the picture in the note to open it in full-screen view.

4. Tap on the preferred pen to draw on the image. Then, tap on Done to update the picture with the drawing in your note.

If you want to draw on an image in WhatsApp, you can use its built-in markup tool to write on pictures.

1. Launch WhatsApp app on your iPhone.

2. Open the chat where you want to send the picture.

3. Tap on the (+) icon and select Photos & video library. You can even capture a new picture using the Camera option.

4. Select the picture on which you want to draw.

5. Tap on the Pencil icon at the top and start drawing on the picture. Use the color palette slider to select the desired color. Similarly, select the preferred pen type from the options at the bottom.

6. Tap on Done and press the Send icon to share the image.

Tip: Learn how to message yourself on WhatsApp.

If the native options don’t suit your needs, you can also use third-party apps to draw on a photo on your iPhone.

1. Download and open the You Doodle app on your iPhone.

2. Tap on File followed by Import.

3. Choose Draw on top of a photo and followed by Camera Roll. Then, select the photo from the Camera roll on which you want to draw.

4. The crop screen will show up. Tap on Done.

5. You will be taken to the actual editing screen. Start drawing on the image with the default colors and pen style. Or, tap on the Brush at the bottom to change the pen style and color.

1. How do I revert an image back to normal after drawing on it?

If you used the markup tool in the Photos app to draw on the image, then open the image and tap on the Edit button followed by Revert to undo changes.

2. How to draw an arrow or add text to a photo on iPhone?

Open the photo in the Markup editor in any supported app like Photos, Messages, Files, Email, etc. Tap on the (+) Add icon and select Arrow or Text from the list.

Those were different methods to draw on a photo on iPhone. Know how to remove the background from an image and also learn how to put a picture on another image on iPhone.