6 Ways to Draw on a Photo on Samsung Galaxy Phones 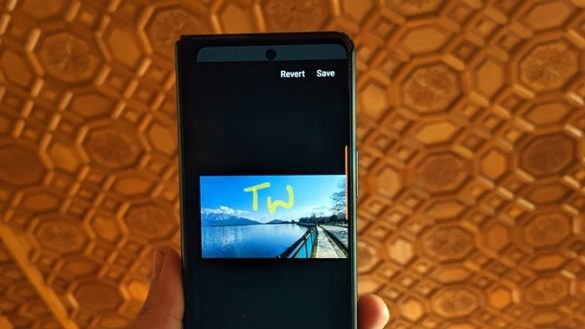 One of the easiest ways to draw on pictures on Samsung Galaxy phones and tablets is by using the pre-installed Samsung Gallery app.

Follow these steps to draw on a photo on Samsung using the Gallery app:

1. Launch the Samsung Gallery app and open the photo on which you want to draw.

2. Tap on the Edit icon at the bottom.

3. Tap on the Smiley icon in the photo editor. The drawing mode will show up.

5. Similarly, use the Highlighter mode to draw on your image. You can customize the highlighter size, color, and style. Or, tap on the Blur pen to blur part of your image.

6. If you want to remove any drawing from your photo, tap on the Eraser icon to activate it and then move your finger over the drawing that you want to delete.

7. To save the photo, tap on the Save button at the top. However, please note that doing so will replace the original photo with the edited image.

To keep your original photo safe, tap on the three-dot icon and select Save as copy. This will save the edited image as a new image on your phone.

Tip: Check out other cool features present in the Samsung Gallery app.

This method allows you to draw on your screenshots instantly after capturing them on your Samsung Galaxy phone. However, you must first enable the screenshot toolbar in settings.

Follow these steps to draw on photos using the screenshot editor in Samsung:

3. Enable the toggle next to Show toolbar after capturing.

Note: You need to perform the first three steps only once.

4. Take a screenshot on your phone.

5. You will see the screenshot toolbar at the bottom. Tap on the Pencil icon in the toolbar to go the drawing mode. Start drawing on the picture with your finger.

6. Tap on the Pen icon in the drawing toolbar to change the pen color, size, and style. And, use the eraser to remove unwanted markings from your picture.

7. Finally, tap on the Save button to save the photo to your phone or press the Share icon to directly share it any app.

Tip: Check out the best tips for taking screenshots on Samsung Galaxy phones.

If your Samsung Galaxy phone supports Edge Panel, you can also use it to draw on photos using the Smart Select edge panel. This method allows you to capture screenshots in different shapes like rectangles and ovals, and then draw on them.

For the unaware, the Edge panel is an auto-hiding sidebar present in Samsung Galaxy phones that can be used to access important things quickly from any screen. For instance, you can use it to open favorite apps, access the clipboard, and draw on photos.

Here are the steps to draw on a photo in Samsung Galaxy phones using Edge Panel:

1. Open Settings on your Samsung phone.

3. Enable the toggle for Edge panel. Then, tap on Panels.

4. Tap on the Smart select panel to activate it.

Note: The above 4 steps are one-time only.

5. After activating the Smart select panel, open the photo or screen on which you want to write something.

7. Swipe right or left to cycle through the Edge panels until you reach the Smart select panel where you will see buttons like Rectangle, Oval, Animation, etc. The first two options allow you to crop your picture in the specified shape.

8. Tap on the desired option, move the selection area to the portion you want to screenshot, and hit the Done button.

10. Finally, tap on the Save button to download the photo.

If you enjoy using the Google Photos app instead of Samsung Gallery, you can also use it to draw on photos on your Samsung Galaxy phone.

1. Launch the Google Photos app on your phone.

2. Open the photo on which you want to write or draw. If you can’t find the desired photo in the Google Photos app, tap on the Library tab at the bottom and open the folder having the image present under the Photos on device section.

3. Tap on the Edit button. Then, scroll through the editing tools and tap on Markup.

4. Tap on the Pen button and start writing on the photo. Press the Done button.

5. Finally, tap on Save copy to download the edited photo as a new image.

Tip: Check out the best tips to edit photos in the Google Photos app.

If you have an S-Pen for your premium Samsung Galaxy phone, you can use it to write on pictures using the Screen Write feature present in the S Pen or Air Command menu.

Open the Air Command menu of your S Pen. Choose Screen Write from the menu and then start writing on the screenshot captured using your S Pen. Tap on the Save icon to download the picture to your gallery.

In addition to the native tools, you can also take advantage of third-party apps to draw on photos on your Samsung Galaxy phone.

Some of the apps that you can try are: