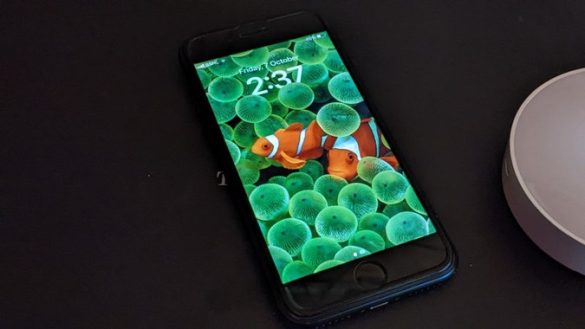 Follow these steps to set up photo shuffle on iPhone:

1. Open the notification panel on your iPhone.

2. Touch and hold any empty space on your screen.

3. Tap on the (+) Add button at the bottom. Select Photo Shuffle.

4. Now, select the photos that you want to use as your wallpaper and hit the Add button at the top.

6. Once you have edited the wallpapers, tap on the Add button at the top. If you want to change both the lock screen and home screen wallpaper automatically, tap on Set as wallpaper pair. Alternatively, tap on Customize home screen to choose a different wallpaper for your iPhone’s home screen.

Now, your iPhone’s wallpaper will change automatically based on the shuffle frequency set.

Follow these steps to link a focus to the lock screen wallpaper:

2. Go to Focus and select any focus profile. You can even create a new focus profile by tapping on the (+) Add icon at the top.

4. Select the desired wallpaper and customize the lock screen as per your need. Tap on the Add button to link it to the focus profile.

If the above two methods do not work, you can use Shortcuts. In this method, you need to take the help of the Apple Shortcuts app to change the wallpaper automatically and then assign a trigger to run the shortcut. There are plenty of ways to trigger the shortcut. For instance, the time of day, sunrise, sunset, when you arrive home, when you leave work, etc.

The entire process is broken down into three main steps:

Let’s check the steps in detail.

Step 1: Organize Your Wallpapers in an Album

Once you have the wallpapers saved in the Photos app, we need to put those wallpapers in a separate album so that it would be easier for the shortcut to find the wallpapers later on. Follow these steps:

3. Create a new album by tapping the New Album button. Give it a name, and tap Save. Remember the name of the album because we’re going to need it later.

Now, we’re going to create a Siri Shortcut that would fetch a random wallpaper from the album we just created and set it as wallpaper on the iPhone’s lock screen.

1. Install and open the Apple Shortcuts app on your iPhone.

2. Tap on the + button at the top right to create a new shortcut. Then, tap the Add Action button to start building the shortcut.

3. Search for the Find Photos action in the menu and tap on it to add it. Then, tap the Add Filter button. This would allow us to add the wallpaper album so that the shortcut only uses those images.

4. Tap the empty space next to Album is label. It would reveal a list of albums that you can select. Tap the name of the wallpaper album we created before.

5. I like to randomize the wallpapers which would keep the order organic and won’t feel predictable. Therefore, tap the variable next to Sort by and select Random from the list. It will be at the bottom of the list.

6. As the shortcut can only set one wallpaper, enable the toggle next to Limit and set it to 1 using the – icon.

7. Now, you need to add another action. Use the search bar at the bottom to find the Set Wallpaper action. Tap on it.

9. Tap on the arrow in the Wallpaper card. Disable the toggle next to Show Preview as it would allow the Shortcut to run without user input.

10. Give your Shortcut a name and tap Done. Our Shortcut is almost ready for action.

Finally, we just need to set up an automation that would trigger this shortcut automatically.

1. Open the Shortcuts app and tap the Automation tab at the bottom. Then tap the + button at the top-right to create a new automation.

3. Select a trigger at which you want to change the iPhone wallpaper automatically. I went with Time of Day as I can set it to run every morning just before I wake up. That way I’d be greeted with fresh wallpaper every day. You can select any other trigger. Then, adjust the time when you wish the automation to trigger and tap Next.

4. Now, tap the Add Action button. Then, search for Run Shortcut and add it by tapping on it.

5. Then, tap the Shortcut label next to the Run label to open a list of Shortcuts on your iPhone. Find and select the shortcut we created earlier and tap Next in the top right corner.

6. Turn the toggle off that says Ask Before Running and confirm on the pop-up that shows up. This would allow your shortcut to run without any user input. Hit the Done button at the top.

That’s it, your iPhone would now automatically change the wallpaper whenever the automation triggers the shortcut.

Those were three quick and easy ways to automatically change the wallpaper on the iPhone. In case your wallpaper appears dark or blurry, learn how to fix blurry wallpaper on iPhone. Also, check out the best tips to customize iPhone home screen and top iPhone icon packs.