Whether you’re recording a podcast, a speech or even a classroom lecture, you’ll find parts of the recording where there is no or minimal audio. It’s easy to edit and remove all these parts manually but there are easier and faster ways, so you don’t waste your time picking every detail. While this isn’t a cheat sheet to remove silence in post-processing and always leave it to editing, I suggest you should always try and improve as much as you can before recording.

So let’s see how we can remove silence from mp3 automatically.

How to Remove Silence From Audio File

It’s already a widely used software. From editing podcasts to recording entire albums, it does everything. I use it for all my sound editing and basic processing and it fits the bill perfectly. One feature that I use majorly is the “Silence Removal Tool”. It comes in handy in all situations, removes major chunks of silence and not only saves time but storage space as well. Here’s how to do it on Windows with Audacity. 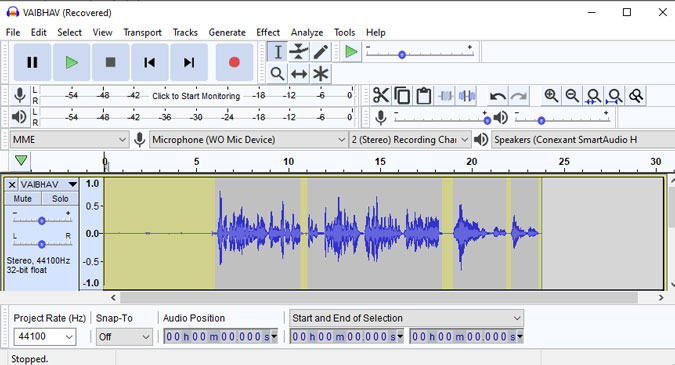 Silence parts are highlighted in the above image.

Download Audacity from the link below, install and open. You can either record audio or simply drag and drop the audio sample that you want to process. You’ll see your audio in a waveform and if you notice closely, there will be parts where there is no audio (i.e. straight line). But when you play the track and if you notice the monitor, you’ll notice it jumping up even when silence is played. So if you’ve recorded yourself with a lot of pauses, feel at ease, as we’ll remove silence in one go.

To start double click on the track or click Ctrl + A to select all. Then click on Effects, scroll down and find Truncate Silence. If you’re not sure, leave the settings as they are and click ok. This will give you a trimmed version of the audio file after removing all the silence.

If you want to tweak the setting yourself.  Here’re the attributes you need to know about in the Truncate Silence dialog box. Under detect silence, you’ve threshold and duration. 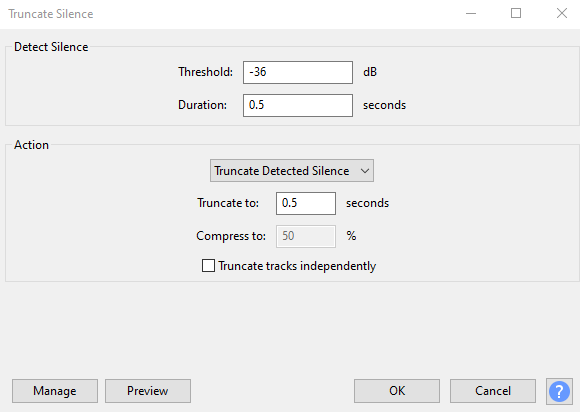 Threshold – If the audio is below the specified level, it’ll be considered as silence. To remove more silence you can reduce this number, for example, from -36 dB to -20 dB. This will give the software more audio to work on.

Duration – It specifies the minimum duration the silent parts should be to be considered for removal. The last amount can be tweaked to 0.001 seconds.

Compress to – It’s a more advanced feature.  If the audio is below the Detect Silence in both threshold and duration but still longer in duration, it’ll be reduced to the percentage specified in Compress to function.

Truncate Tracks Independently – If there are more tracks and you apply this tool on all of them, it won’t remove any silence as it won’t detect it at the same point. Therefore, choosing this option will remove silence independently from all the different tracks.

You can also save the preset if you tend to use the same settings more often.

Another piece of app that comes in handy when vocal processing is the task at hand. The app is feature-rich and you can do a lot besides basic editing. All the options like trim, merge, convert, split, etc, are given in the form of tiles, so you can choose a specific feature to work with. 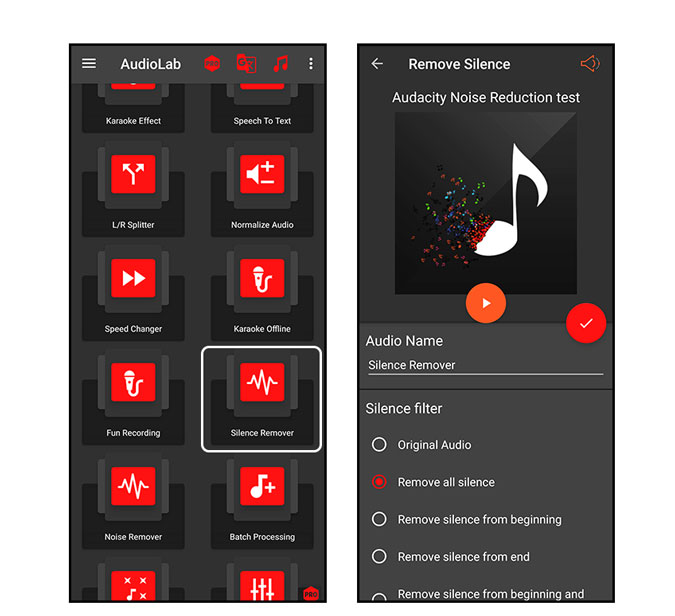 Scroll down and find Silence Remover then select it.  You can either select tracks from the all tracks list or choose the file manager to select it manually. There is also an option to record audio. In addition to that, you can preview the audio and change the file name. There are silence removing presets you can choose from. You can remove all silence or just the beginning and end.  Next, you’ve to select the decibel threshold below which mark, everything will be considered as silence. You can leave the detection mode as it is. There is also an option to use the output as default alarm, notification or even a ringtone but let’s skip this for now. Then click the tick option which will remove the silence and create another file. You can view the file in the AudioLab output section and also listen to the original file.

Get AudioLab for Android.

If you are an iOS user looking for an easy way to remove silence from an audio file, this is the app you need.

To get started download the app from the link below and then open it. You can import audio by opening the menu from the top right corner. If you wish to record voice, simply press the mic button. As soon as you import or record audio, you’ll find the track right below the recording section. Now coming to removing the silent parts.

Simply load the track and click on the track to select it. Then toggle to see more options and select Strip Silence. There are options to tweak which parts you wish to remove. To do that choose the threshold, you can also fade silence and set the duration for minimum silence. One thing you should keep in mind is that it’ll just remove silence. So essentially it leaves blank spaces, therefore you’ll have to drag the clip to line them together. Simple right?

Get Ferrite Recording Studio on iOS.

While removing silence is often confused with noise reduction by many, I’ve just listed ways you can remove silence. Audacity is by far the simplest and most functional. It’s available on all major PC platforms including Linux. When it comes to Android which is also where I record most of my audio, Audiolab not only has silence remover but other important features like merge audio. voice changer, speech to text and many more. For those of you using iOS, Ferrite Recording Studio is a great option and the silence remover even works with the free version of the app. Hope you try these out and don’t lose your time to silene, Good Luck!

How to Setup Shared Folders, Users, Permissions on...