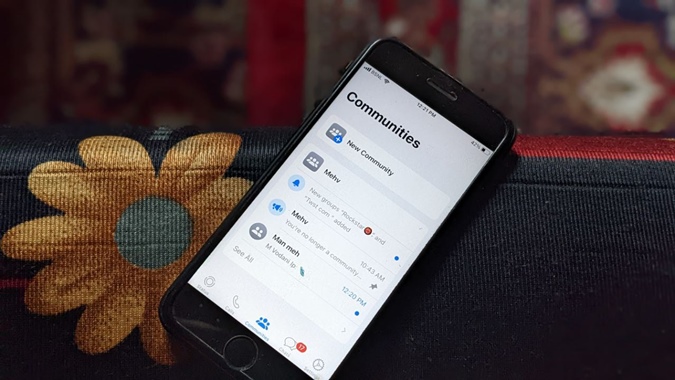 1. What Is a WhatsApp Community

In simple words, communities on WhatsApp allow group admins to organize and manage their related groups under one space. For instance, let’s say a school has a WhatsApp group for each class. The school admin can create a community on WhatsApp and keep all the school groups under this community.

The community admin or in our example the school admin can then keep track of and manage each group easily. They can add or remove groups or group admins, invite members to the community, and send announcements to all the members of the community using the Announcement group. Learn how to start a community on WhatsApp.

Note: Both your personal messages and calls in a community are end-to-end encrypted.

2. Who Should Use WhatsApp Communities

Communities are mainly helpful for group admins. So, if you are a group admin who manages multiple WhatsApp groups, you will love the WhatsApp community feature.

3. What’s the Difference Between WhatsApp Groups and Communities

4. How Many Groups Can a Community Have

5. What is an Announcement Group in WhatsApp Community

Note: Members can mute notifications for the announcement group in the group settings.

6. What are the Roles and Powers of a Community Admin

The community admins have the following powers:

Tip: Learn how to add or remove admins from the WhatsApp community.

7. Who Can See the Groups Added to a Community

For instance, let’s say there is a community XYZ with groups A, B, and C. A person named Barbie is part of community XYZ through group A. She can see the name of groups B and C in the community under the Other groups section.

8. Can Members Join Other Groups in a Community?

Yes, the community members can request to join groups that they aren’t part of. Simply, tap on the group name under the Other groups section and hit the Request to join button.

9. Can Members of a WhatsApp Community Interact With One Another

For example, if you have two groups A and B in community XYZ, a member from group A cannot interact with any members of group B through the community unless they personally know each other.

10. Can Community Members Invite Others to Join a Community

The community members do not have the privilege to invite others to join a community unless the admin has shared the invite link with its members.

11. Can You Search for New Communities on WhatsApp

No. You can only see the communities that you are part of. There are no public communities on WhatsApp.

12. Is the WhatsApp Community Like the Folder Feature of Telegram

You can consider WhatsApp communities as an advanced version of Telegram folders. That’s because not only you can organize your groups in a community but you can even send a message to all the members of the community using the Announcement group of a community, which isn’t possible in Telegram folders.

Moreover, the participants of a community can see all of its groups. This again is missing in Telegram where folders only provide a way to organize multiple groups without adding any functionality.

13. What Happens When you Exit a WhatsApp Community

If you are part of a community you don’t like, you can easily exit it from the community info page by tapping on the Exit community button.

Leaving a community will make you exit all the groups that you were part of in that community. If you only want to remove yourself from a particular group, simply exit that group instead of leaving the community. You can always rejoin a community but you will have to meet certain rejoining conditions.

14. What Happens When You Deactivate a Community

Only the creator of the community can deactivate it. And when a community is deactivated, all its groups are disconnected from the community. That doesn’t mean the groups will be deleted. They will continue to exist just like regular groups and you can find them in the Chats tab of WhatsApp.

Similar to WhatsApp Communities, there are some other cool features in WhatsApp. Learn how to call people on WhatsApp using links or add reactions to WhatsApp messages. Also, know how to send disappearing messages on WhatsApp.