Best Alternatives to DS4Windows to Use Your PS4 Controller on PC 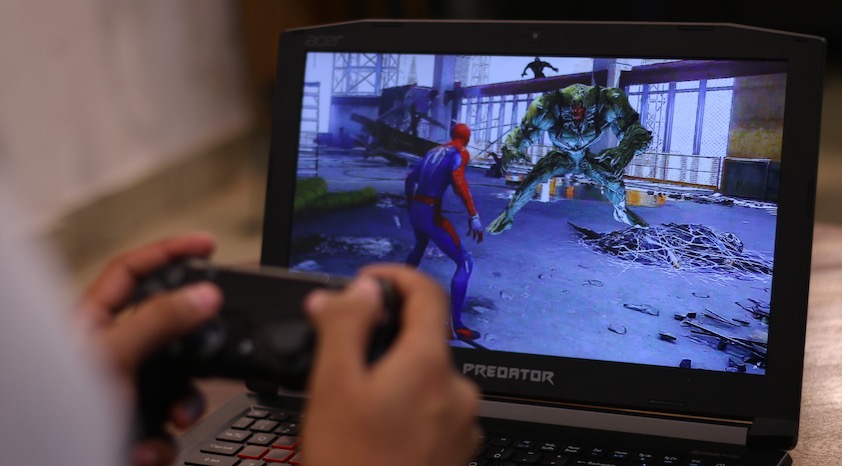 The Dualshock 4 controller is a great way to experience games on PC. It’s been rated the best PC controller by none other than PC Gamer even though it wasn’t designed with PC gaming in mind. DS4Windows is the default tool many people use to connect their DS4 controller with a PC. It’s a great, easy-to-use solution. But it lacks sorely in terms of customization. We’ve curated this list of DS4Windows alternatives that’ll let you do just a bit more with your PS4 controller.

Read: How to Play PS4 on the Laptop Without Remote Play

Who it’s for: Users who are already part of the Steam ecosystem

If you’re a Steam user with a PS4 controller, you’re in luck: Steam’s much-maligned Big Picture Mode was updated a while back with native support for the DS4, Xbox One controller, the Switch Pro controller, and generic USB controllers.

There’s an interesting story behind this. Valve, the company behind Steam, launched their own controller a few years ago called the Steam Controller. It was an utter market failure since the software was buggy and unreliable at launch. I had a hairpulling – frustrating time with my Steam controller and shelved it for over a year. I started using it again a few months ago and the experience has matured considerably. Unfortunately, it was too little, too late. Valve seemed to get the picture. So instead of keeping the Steam Controller’s unique functionality exclusive, they opened up Big Picture Mode support for every mainstream controller, including the DS4.

The setup process is refreshingly simple. Hold down the PlayStation button and the Share button on your DS4 controller until you see the light bar start repeatedly flashing. That flashing indicates the controller is now in pairing mode. Next, open the steam app and get into Big Picture Mode, then enable PS4 Configuration Support in the controller config. After that, you just connect your DS4 wireless dongle to your PC and that’s it.

Big Picture mode lets you customize your DS4 extensively. You can set it up to use the gyroscope for motion aiming. You can use the touchpad as a PC mousepad. And, of course, you can remap buttons to your heart’s content. Because of how easy it is to set up, and because it’s the closest we have to “official” support for the DS4 on Windows, Steam Big Picture Mode is our personal recommendation as a DS4Windows alternative. It does have one big drawback, though:

Big Picture Mode and controller functionality are intrinsically tied to Steam. This isn’t a system-wide DS4 driver so it’ll only work within Steam. This isn’t a huge deal, though. Steam gives you the option to add non-Steam games and support for these is a lot more reliable nowadays than near launch. But this means that you’ll have to set everything up to route through Steam. Moreover, you can only open your games in Steam Big Picture Mode if you want full controller support. You can’t just click on a desktop icon and have the controller work in-game. There is a desktop mode setting but it’s not as reliable as you’d want it to be. It’s not without its flaws but as long as you’re using Steam anyways, Big Picture Mode’s DS4 support is just fine. 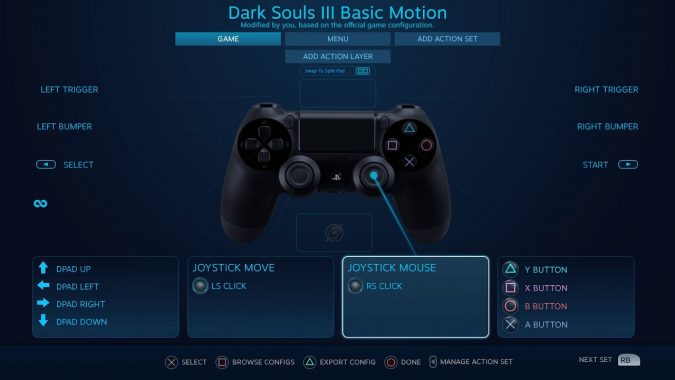 Who it’s for: Users who also want to connect PS3 and PS2 controllers

SCP has been around for a long time. I was using it to connect Dualshock 3 controllers to my PC 5 years ago. It came out in 2011, making it older than the PS4 itself. It was built with support for PS3 and PS2 controllers in mind and DS4 support was added in later. Fun Fact: DS4Windows actually makes use of SCP’s driver, while adding inconvenience features for DS4 users. This means that if you use SCP Toolkit, you’re using the same thing, as far as your PC’s concerned. The main difference is that, because SCP’s got support for so many other Dualshock devices, you can use it to have your PS2, PS3, and PS4 controllers hooked up to PC. This is a perfect illustration of how flexible PC is. I often run Super Smash Bros Brawl, a Wii game via the Dolphin emulator.

When friends come over, it’s easy to have four-player matches: Two PS3 controllers, Dualshock 4, and the Steam controller, all working at the same time. SCP makes that seemingly impossible combination a reality. The main drawback, though, is reliability. SCP can be iffy if you’re not using a genuine Sony controller. Also, combinations of Bluetooth and wired connections work, but only sometimes. If you want to use SCP for Bluetooth connectivity, you’ll need to dedicate your Bluetooth adapter for that. It can handle up to 4 DS3 controllers at a time, but you’ll need another adapter for any other Bluetooth controller you have. So while SCP offers great flexibility, it does so at the cost of reliability. 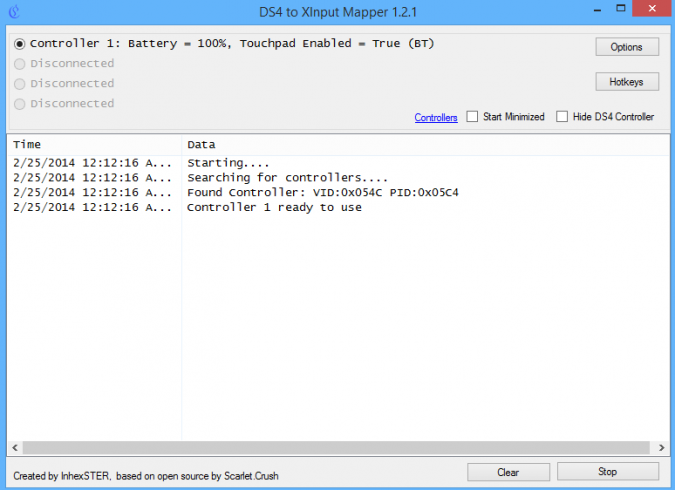 Who it’s for: Users who want to use the DS4 in PC games without native controller support

Pinnacle Profiler has been around for a very long time, well before the PS4–it’s the oldest solution in our list here. What Pinnacle lets you do is map keyboard and mouse functions to gamepads. There are a lot of gamepad-mapping solutions out there but what makes Pinnacle different is that it has a wide range of tailor-made profiles for specific games. While your input icons will still show up as mouse-and-keyboard, the better Pinnacle profiles can feel almost as good as native controller support. We have to add here that Pinnacle by itself doesn’t support the DS4 controller: you have to get the DS4 running with a system-wide driver like SCP or DS4Windows first before using Pinnacle.

Once you do get it working, though, Pinnacle Profiler is a good way to experience many PC games that otherwise require a keyboard and mouse setup, such as Dragon Age: Origins or the STALKER series. Many of these are optimized for keyboard-mouse play so a controller might not give you the ideal response. Still, Pinnacle will let you do controller-based couch gaming with your DS4 in game that would otherwise require taking out your keyboard. 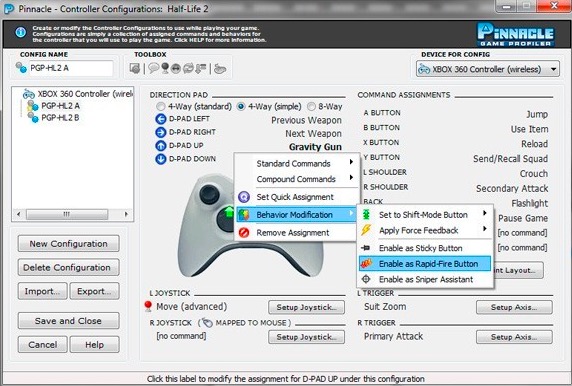 Who it’s for: Power users who want greater customization options than DS4Windows offers

DS4Windows’ greatest feature is also its main weakness: It’s very easy to use. It’s a plug and play solution that might not offer all the customization that a real power user would want. Granted, it lets you set lightbar color and it has some control mapping function, too. However, DS4Tool is the best choice if you want access to deeper input customization. DS4Tool gives you fine-grained control over a range of input settings, such as rumble intensity and touchpad sensitivity for general touch, tapping, and scrolling. It lets you remap buttons, too. Best of all, the real-time changes switch allows you to makes these tweaks and see how they work in real-time.

If you have arthritis or other issues that can make control use difficult, DS4Tool lets you set adjust the trigger middle-point (how much pressure you need to apply for the triggers to register input). This can make shooting games a lot more accessible to certain users.

Read: How to Turn Your TV on Using Your PS4 Controller

DS4Tool’s not without its drawbacks. Setup isn’t quite as plug-and-forget as DS4Windows. For instance, you have to manually connect and disconnect the controller every time by pressing down the PS button: if you forget, you’re just going to run down the battery. Moreover, DS4Tool presents DS4 controllers to the system as Xinput devices (Xbox 360 controllers). Using the built-in control mapper, you can remap controls to different Xbox functions, but you can’t map buttons to keyboard or mouse–you’ll need to use something like Pinnacle to do that.

Each of these tools has its own advantages and disadvantages. With the exception of Pinnacle Profiler (which is something you should use on top of a DS4 driver), each of these options is a viable total replacement for DS4Windows. Steam Big Picture Mode is the default port of call: If you use Steam at all, this is the closest to “official” DS4 support you’ll get on Windows. It offers powerful customization and mapping features. However, it’s tied down to Steam and trying to use your DS4 system-wide can quickly turn into an exercise in frustration.

SCP and DS4Tool are both great alternatives to DS4Windows. Neither is as easy to use and both are more prone to crashing than DS4Windows. However, SCP lets you use legacy Dualshock devices and DS4Tool gives you control over more input settings like touchpad sensitivity and rumble intensity. From personal experience, we consider Steam Big Picture Mode to be the best solution: It’s straight from Valve, so there’s official support. And besides, motion-controlled aiming and driving in-game (which you can set up using this), never get old.

You know what’s even wackier than using your PS4 controller on PC? Using AirPods with your PS4.